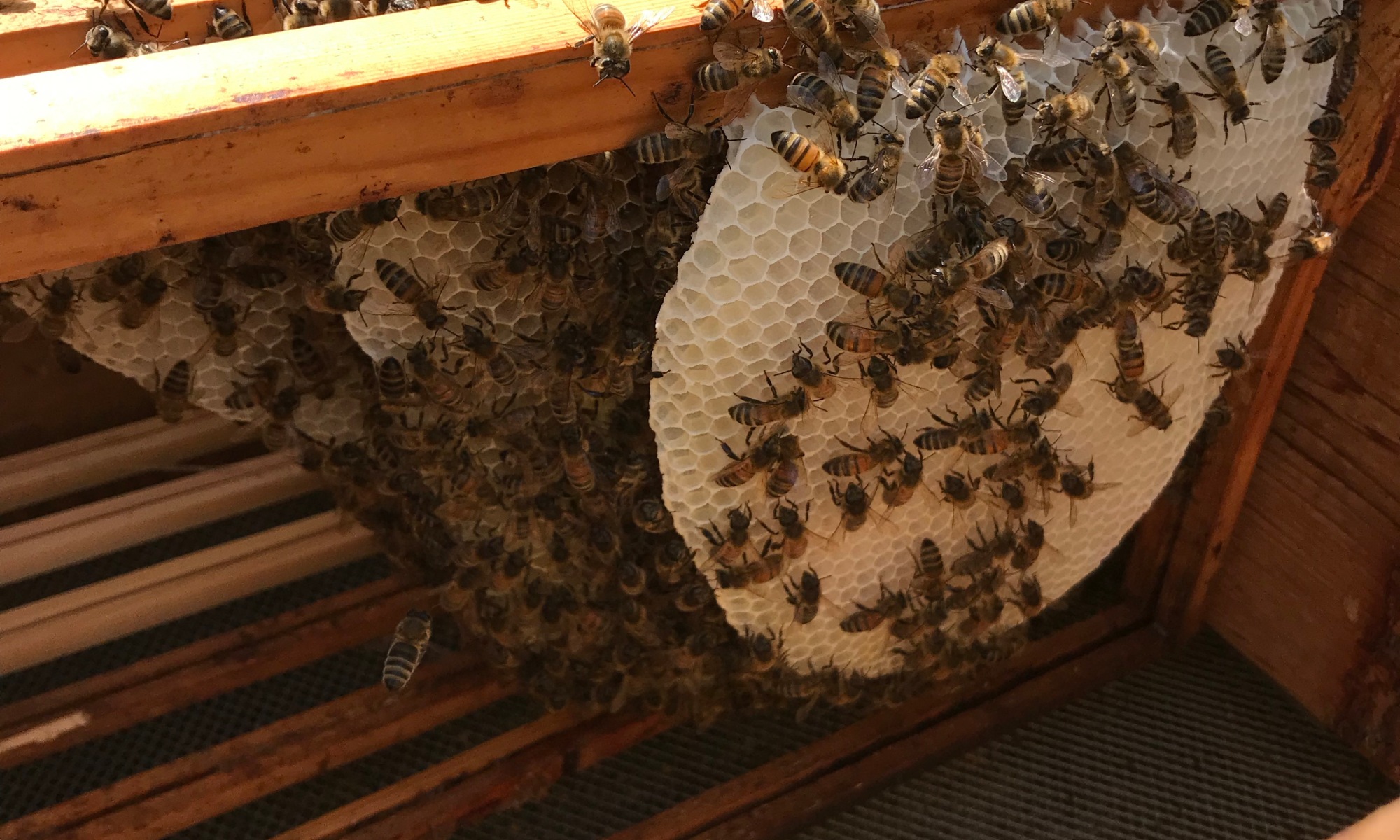 If you have recently acquired some bees for your new hive, you might be wondering how and when to check them. The books will tell you various things, but the balance is about familiarising yourself with handling bees, and allowing the colony to settle and get on with the essential task of building wax and getting in provisions to feed the workforce.

For the purposes of this post, I’m assuming you have collected a swarm or a small nuc rather than a ready-made colony from a bee farm. The latter really just needs space as they tend to have been cooped up in a 6-frame box and will be eager to motor on.

So, let’s assume your bees have been collected and placed inside the hive. Many people regard feeding swarms and small nucs as essential, in order to get them started and start drawing out wax, and feeding the queen to stimulate and refuel her in to laying. Personally I don’t feed my colonies ever, but if the weather is terrible (as it has been here in the UK this past week) with wall-to-wall rain, it is wise to give them a bit of a leg up with a spoonful or two of raw honey from a known source. This is in bold italics because honey from a supermarket could be from anywhere, so if you can’t get access to decent raw honey from a beekeeper with a clean disease record, feed them some sugar syrup. If you don’t have a feeder you can use a plate with a sponge submerged in it, saturated with sugar syrup (a mixture of white sugar and water, heated till it dissolves then cooled). Sit this on the crownboard with an empty super if necessary. With honey, you can just slop a few spoonfuls on top of the crownboard, and the bees will circle round it, proboscises at the ready.

However tempting it may be to feed more, the sooner they get out and forage the better, so only feed if you genuinely feel they are at risk of not being able to get out at all. If you know when they swarmed so much the better as the bees will have provisioned themselves from their parent colony’s larder and filled their crops with honey which will last them a few days. Let them use this, and then allow them to orient to their new surroundings by foraging. If the weather is good, there is no need to feed and the main thing to check when you’ve first hived them is that they are indeed in the brood box on the frames, not all in the roof. So, take off the lid and check that the majority of bees are down where they should be, with little faces looking up through the holes in the crownboard:

If there are lots of bees are milling around all over the roof and crownboard, it can be because the queen isn’t exuding a lot of pheromone, and it may well be a cast swarm. Knowing if your swarm is a prime or a cast is important as it does mean you can expect different things from the bees.

With a prime swarm (or a nuc made from a prime swarm), you’re going to have a larger colony, displaying more coherent behaviour, and they will have a laying queen so you will see the colony build up rapidly if the conditions are good – that is good foraging weather and plentiful forage. A cast swarm needs to get the queen mated, and there are fewer bodies to start with so will take longer to establish.

So, if you think you have a prime, check within a week. With a cast, or small swarm, just take off the lid after a week, and then check again properly a couple of weeks later. Feeding, if necessary, should be done immediately and as this is not disturbing the bees, doesn’t count as a “check”.

What are we looking for when we check our new bees?

This is where I rather depart from the norm (which won’t surprise many of you). Here, I would replace the frames, crownboard, and lid and walk away, happy that the bees were progressing well. If this is your first colony of bees, it is a good opportunity to get used to seeing and handling them on the frames.

Gently pull back and lift out the first frame with bees on it. If they are festooning with linked legs, they are comb building, so gently ease the frame away and allow the bees to gather themselves. Keep the frame vertical as this new comb is extremely delicate, and hold it over the brood box to have a look. Firstly, wonder at the beauty and skill of these natural engineers. Then look for nectar which will be glistening in the cells, and pollen which will look like cells filled with plasticine. Gently replace the frame a little away from its neighbour so you can lift out the next one. There might be some propolis between the frames so use your hive tool if necessary to lever them apart, all the time working gently gently and being mindful of the bees.

The next frame might have more stores (nectar and pollen) or it may have an empty patch in the centre, where there may be eggs. They are difficult to see on fresh white comb, being white and tiny and through the veil, so don’t worry if you don’t see any. Replace the frame as before and move to the next one. As we move through the nest, the numbers of bees will increase, and you might see the queen. She is much larger than the workers or drones and moves in distinctive way as she has a large abdomen and relatively small wings, but again, no need to worry if you don’t see her. There may be grubs in the bottom of the cells, which should be plump and glistening. There may be capped brood which will be in the centre – this looks flat, and will be surrounded by younger brood. BIAS, which stands for Brood In All Stages is all the reassurance you need that your colony is performing as it should, and now you can replace the frames and gently push them up together, being careful to not crush any bees between them.

A mature queen will begin laying within a few days, if not hours, so with a prime swarm you may well see eggs and grubs in the first week. A cast swarm needs to get the queen mated which is why we leave them for longer – it can be very disruptive to be opening the hive during this formative time.

A prime swarm may well supersede once they have eggs, meaning they will replace the queen that they swarmed with for a new one, so you may see queen cups or even cells when you check the frames. This is natural behaviour and it’s important to then leave the hive alone as if it were a cast as essentially the same process is occurring.

Put the hive back together: crownboard and lid, making sure to push the bees out of the way as you do so and that the lid is on straight. I’ve not mentioned using smoke as it tends to be quite distracting and the bees are focussed on their home, but it’s a good idea to have it lit and put to one side.

Check again in a couple of weeks when the weather is good, and note how your bees have increased in size. I’ll follow up with a post on what you will be looking for in a second check.

5 Replies to “Checking your new bees”