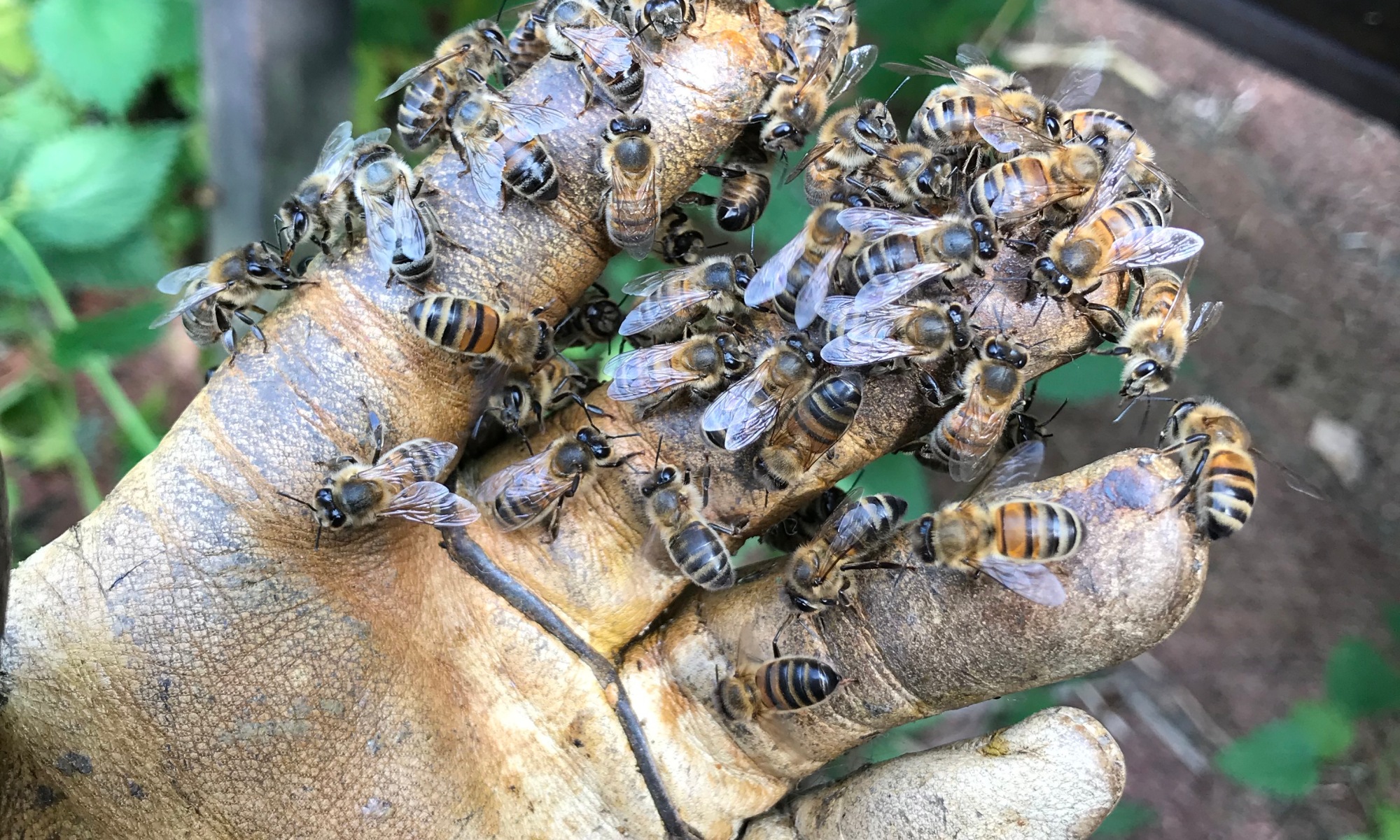 The hives at the Pevensey & Westham Community Forest Garden have done well this year, and are a valuable part of the permaculture ethos of the site. They are health-checked and regularly observed, but otherwise left to their own devices.

Following a compost workshop, one of the attendees noticed a swarm in one of the many buddleia shrubs in the Garden:

I arrived with a swarm collecting bag and telescopic pole, as they were about 9′ up in the shrub. Andy wanted to put the swarm in the top bar hive which had been gifted to the Forest Garden last year, located in the other half of the site. There are lots of workshops and volunteering opportunities so we wanted to site these bees slightly out of the way to keep the bee traffic to a manageable level for the public – there have been no problems at all which is brilliant, and testament to the calmness of both the bees and the site visitors.

We collected the swarm (the collecting bag worked really well!) and decanted them in to the top bar hive, and they soon started fanning at the entrance – a good indication that the queen was inside.

There is an old saying about bee swarms:

“A swarm in May is worth a bale of hay

A swarm in June is worth a silver spoon

A swarm in July isn’t worth a fly”

This, however, doesn’t really ring true these days. Due to spring storms, newly-hatched queens can struggle to get out and mate at any time and therefore not be able to restore the colony following the departure of the mature queen and her followers, and with Himalayan balsam and other alien and ornamental plants in gardens, there is forage right through to November to replenish the stores. The round of cold wet weather in June meant swarms didn’t get out but there is no reason why – if we have a reasonable autumn – that these bees shouldn’t be perfectly able to go in to the winter in good shape.Â

We had an empty hive which seemed to have a lot of activity – and realised it was occupied again! The bees had obviously swarmed in to there, so we are now back to full capacity. The hive next to them was pouring with bees, and taking the lid off we realised they were full to the brim with honey. Andy fetched an empty super, and we removed the full one and placed the empty one below it, putting a crownboard with bee escapes between them. I’ve started doing this – then the bees have room to go down in to and it is easier to remove the top super as the bees have plenty of room underneath.

Andy went back the following day and removed this full super, and we are pleased to say there is enough honey to be able to sell back to members of the community. It’s always difficult with projects to do with bees as honey is absolutely not a guaranteed outcome, and it sometimes takes a while for the bees to build up – and in any case, honey is a weather- and forage-dependent crop and there must be enough stores to service the colony as we don’t feed supplementary sugar. So, we can’t use honey sales as a way of financing the apiary, but when there is a harvest it is great to be able to both raise some funds to support the ongoing work with the bees, and give the members in the area some top-notch, raw, sustainably-produced honey from their local hives.

4 Replies to “Swarm at the Forest Garden”