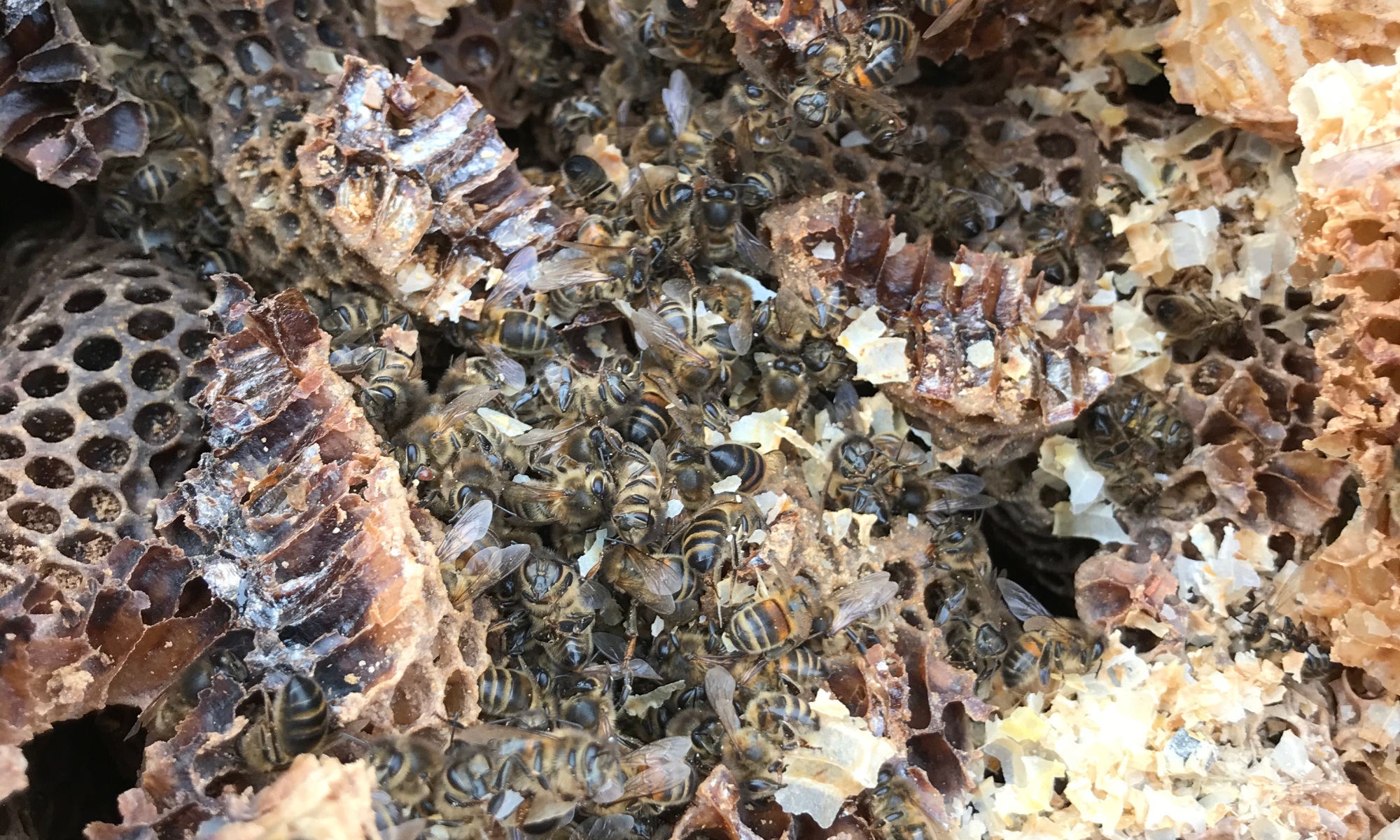 I have had a colony at my apiary which was occupying a brood box full of comb we’d taken out of a feral nest in a wall at Crutches Farm in Winchelsea (see post here). The comb had been piled in and robbed out, but we’d discovered bees bringing in pollen, so moved them over to mine in August. We don’t know where the bees came from, and of course there was no way of checking them apart from external observations. This is no bad thing: watching activity at the entrance, evidence of activity on the inspection board, and looking down through the holes in the crownboard enable you to make an accurate assessment of the health of the colony, but wild comb does make checking to see if there’s a problem more difficult.

It is highly likely that this swarm was a cast, being late in the season, and as you will have gathered by now, cast swarms are less likely to be successful than either a prime swarm, or the colony left behind at the original hive. They need many things in their favour to make it, and our cold, wet, rainy autumn and winter will have challenged many colonies, let alone those which need everything going for them. The bees were flying well in December, but I noticed that the pieces of stick I’d wedged in to make entrance blocks kept getting pushed out, and there were bits of chewed bee on the inspection board. This is a sign of a mouse at work, but as with most potential predators of bees, they will not invade a strong colony so I was feeling a bit dubious about the survival of the colony.

There was very little activity today, and there was a small collection of 6 or so bees gripping on to the landing board, and another staggering around. I decided to open it up and sadly the colony has died.

The bees themselves were still moving slightly so I had to be careful poking around (as their stings still work!) but I did see mites:

You can see that this one has the shrunken abdomen of a deformed bee affected by the various viral infections transmitted by the mite.

In this photo, there are actually two “camps” of bees, one cluster on the left, and one on the right:

The right side of the inspection board is where I saw the chewed bee detritus, and on closer you can see where the mouse has feasted on the presumably unresisting bees:

Paul and I were discussing whether the jumbled up comb hinders the bees’ access to each other and their stores, as if, as they do naturally, they require combs to be hanging vertically and a specific distance apart, it must affect their winter clustering as well as their ability to disperse to the margins and fetch supplies for their nest if the combs are all over the place.

The combs felt a bit sticky, so there might well have still been some honey in them somewhere, and a bee from another hive in the apiary was buzzing around in an interested fashion, highlighting the need for bees who can tolerate Varroa mites rather than rely on them being removed for them by human intervention. Mites are in the environment, and inquisitive foragers visiting hives who have succumbed will quickly become reinfected themselves: we simply can’t prevent it happening because we are never going to eradicate the mites.

I had not fed these bees, and they are clearly very short on stores. There is a mistake in thinking that bees need feeding to get through the winter. They need feeding if we have taken all their honey, but that is replacing (with the admittedly very poor substitute of sugar syrup) their stored food, as well as removing that storage heater of honey-filled comb from above the nest. It is not just feeding them to get them to survive irrespective of whether honey has been taken or not. I have not fed any of my colonies, yet the other 4 in the apiary are flying and bringing in pollen. And yes, there are mites on their inspection boards too. Sadly there is a huge stigma in “admitting” your bees have died, and much finger-wagging regarding the obvious solution to feed and treat if your bees are weak. I don’t agree. As with everything, there is much to be learned from failures, especially with the challenges our bees are facing in the wider environment. If they are just chalked up to winter losses we are missing vital data about how our bees are actually coping, and what is happening to them, hence these posts.

This is an excellent article explaining the potential for host parasite tolerance.