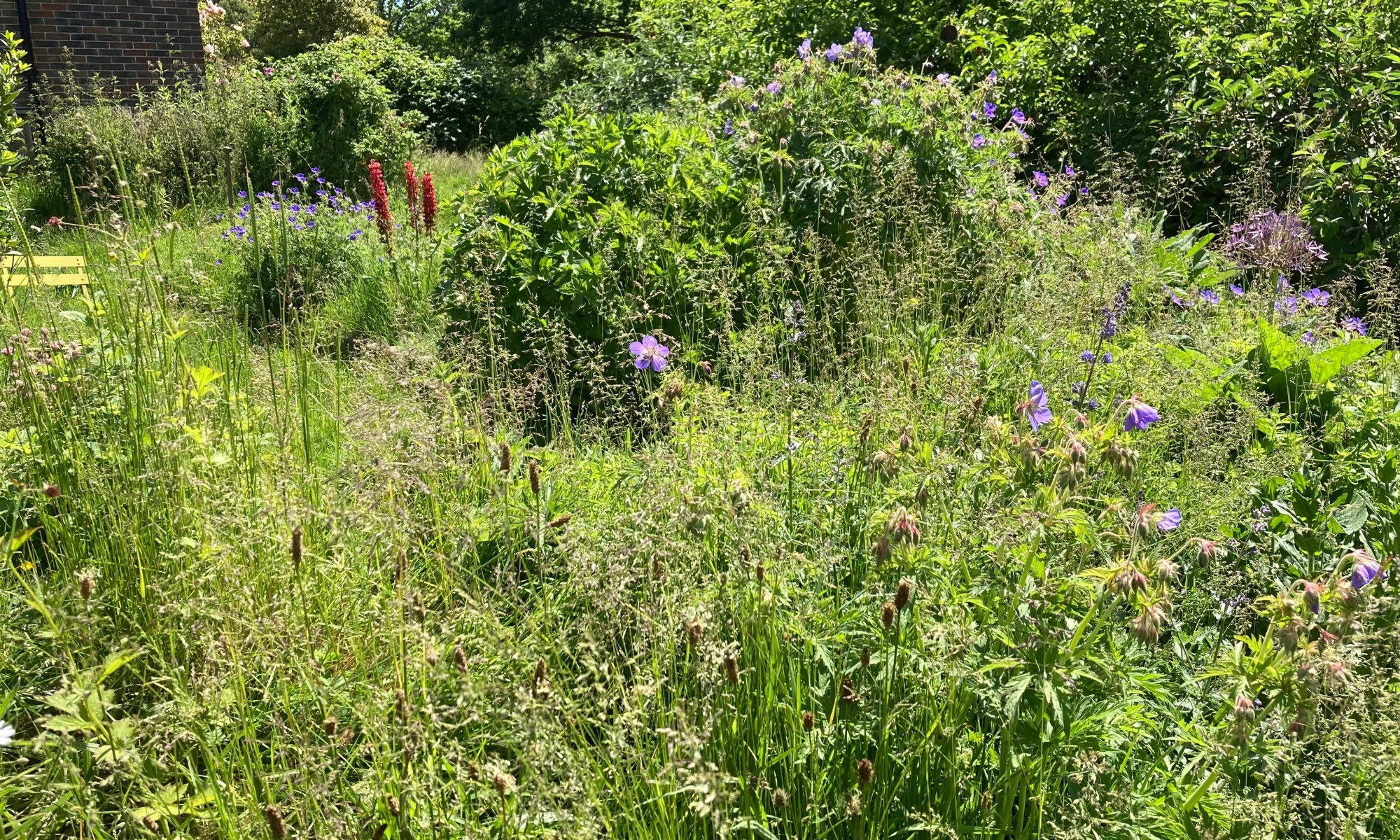 It’s taken a while, but it’s lovely to have some proper summer weather. There haven’t been many swarm calls which has meant I’ve been able to focus on some other garden projects which I didn’t get round to last year despite going literally nowhere for 15 months…anyone else in that situation? My friend helped my tie in the roses (that’s to say he did it while I talked and made tea) and I was looking forward to having plenty of light in that south-facing study, forgetting that the triffid of a hollyhock quickly obscures the entire window. My daughter has annexed that room for her work-from-home now so I can’t really get in to the room anymore anyway.

The garden really looks after itself, and this year I’ve not even bothered pulling out the meadow grass which gives everything a rather fuzzy, soft-focus look. I do pull some up to give to the hens but it hardly makes a dent! The seeds are full of protein and I use handfuls of free grass seed to restore the patches where the coops have been.

The new henclosure is going well, although the roosters seem to see the gate as a minor inconvenience, possibly even a challenge, and they love the high vantage point from which to declare their virility and vigour:

Once over of course they realise they can’t impress their ladies so usually hop back in again. I love the split chestnut panels, and it’s working well having the poultry shut in – they are starting to learn where to go as I throw a few sunflower seeds in before I let them out of their permanent coops and they run up the garden to get to them before the dunnocks do. I ‘tin train’ my chooks so they come for a rattle of corn in an old food can; I remember once catching a loose horse on a similar principle with a bucket of clothes pegs – it’s a useful Pavlovian response. The Cream Legbars are wearing saddles as one sustained a nasty injury from the cockerel, even though he has yet to grow his spurs. I put raw honey and a bandage on the wound and it cleared up remarkably quickly, but they are keeping their protection on until they moult and grow some replacement feathers. I take the saddles off for a few days every week or so but I then need to keep the hens away from Nelson during the day and put them in a coop next to their run so they don’t become detached from the flock. Domestic poultry keeping is full of challenges.

The ducklings are really big now, and astonishingly I have a feeling they might both be females. If anyone knows about Welsh Harlequins and can confirm I would be very grateful. According to the sites I’ve seen, the hens have yellow bills with a dark tip, and the drakes have slate grey. What do you think?

If they are girls, I would like a medal please for choosing two females from a group of 20 or so unsexed ducklings at 4 weeks old. John the Call certainly thinks they’re female but then he assumes any bird is worth a try so his deductions are not to be trusted…

The geraniums are finally doing their thing, as are the daisies and the roses: